The Link Between Diabetes and PAD

What is the link between peripheral arterial disease (PAD) and diabetes? The presence of diabetes can greatly enhance your risk of developing peripheral arterial disease. It is, however, unclear how many people with PAD have diabetes. The Framingham Heart Study revealed that 20% of people with symptomatic PAD have diabetes. But because many people with PAD do not have any symptoms, this figure is believed to be quite underrated.

In diabetics, PAD most often involves the arteries below-the-knees and tends to be severe enough to cause amputation of the affected limb and results in extended stays in hospitals. In fact, the amputation rates in PAD sufferers with diabetes are 5 to 15 times greater than those without diabetes. 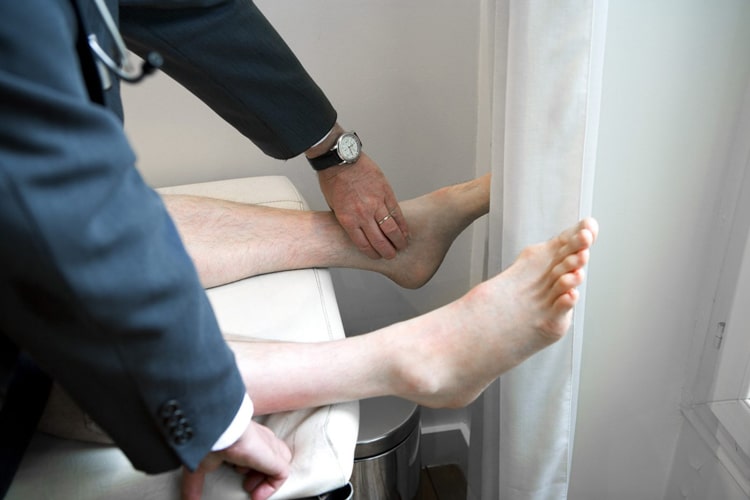 Moreover, diabetes also puts a peripheral arterial disease (PAD) sufferer at significant risk for heart disease and stroke. Remember fatty-plaque deposition in arteries is a feature shared by diabetes, PAD, coronary artery disease (plaque buildup in arteries supplying the heart), and stroke (blockage of the arteries supplying the brain). It is, thus, vital to know the scientific mechanisms by which diabetes drives plaque deposition and instability, which we’ll explore in this post.

How Does Diabetes Trigger PAD?

The spiking blood sugar and lipid (cholesterol and LDL) levels in diabetes promote inflammation of the blood vessels, in particular, arteries by releasing inflammatory substances like C-reactive protein (CRP) into your blood. CRP has a potential to activate white blood cells, which are the first cells to arrive at the site of inflammation. The stimulated white blood cells then churn out multiple mediators (proteins and enzymes) that, in turn, activate the clotting cascade and platelets (purplish blood cells that form a clot to stop bleeding). This cascade of events causes your arteries, including those supplying the legs to develop clots and fatty plaques, thus hardening the blood vessels—the key factors underlying the disease mechanism of peripheral arterial disease (PAD).

The low-grade inflammation and raised CRP levels in diabetes also block the activity of an enzyme that produces nitric oxide—a chemical which when released functions to widen (aka dilate) the blood vessels. The subsequent lack of nitric oxide means that the blood vessels of your body, including those supplying the leg muscles—have a hard time opening up, slowing the blood flow through them.

Endothelium damage is the earliest sign of hardening of arteries (aka atherosclerosis) even before the plaques clog the arteries. The narrowed arteries that lack NO are unable to meet the high oxygen demands during physical activity, giving rise to the hallmark “walking-calf pain (known as intermittent claudication)” of PAD.

For the reasons mentioned above, people with diabetes and peripheral arterial disease (PAD) are encouraged to build-up their exercise capacity at a slow pace as it helps distribute the blood and oxygen to the leg muscles more effectively.

AGEs are products made of proteins and fat formed in high amounts in diabetics after combining with sugar molecules. These AGEs produce free radicals that induce widespread damage in a chain of steps as follows:

Diabetes causes the Platelets to clump together

As mentioned above, platelet activation also drives peripheral arterial disease (PAD) in people with diabetes. Moreover, these purple-colored blood cells tend to clump together in diabetics due to a surplus of adhesive molecules on their surface called P-selectins. The end-result is clot formation and fat build-up in the arteries of your legs and PAD. As such, increased platelet activation reflects the severity of PAD. As PAD worsens, more and more platelets become active and bunch up together.

Fibrin is a protein which forms a mesh, allowing the blood to clot. Normally, our blood produces proteins to dissolve this fibrin meshwork and prevent the clot from growing. However, the high blood sugars interrupt the breakdown of fibrin, promoting the growth of the blood clot that further occludes the arteries. This represents another factor that contributes to PAD in diabetics.

Why does the blood thicken in diabetes? The reasons are two-fold:

What does the outcome of peripheral arterial disease (PAD) in Diabetes look like?

The outlook of PAD in diabetics depends on several factors. Individuals with poor glucose control have greater adverse vascular outcomes, including the need for bypass surgery of the lower leg, amputation or even death. Despite vascular surgery or endovascular intervention, the results of PAD are not so favorable.

What can you do to prevent PAD (or its complications) in Diabetes?

If you are a diabetic, it is of utmost importance to keep your blood sugars under control by implementing lifestyle measures such as:

Adopting a healthy lifestyle not only cuts your risk of acquiring other diabetes-related complications like peripheral arterial disease but also minimizes complications after surgically reestablishing the blood supply to the affected arteries, if PAD does occur.

Do you have diabetes and are concerned about PAD? The doctors at Precision VIR can help you. They are leading experts in Dallas in the treatment of PAD complications associated with diabetes. Make an appointment at Precision VIR and find out how the caring staff and best Dallas vascular doctors can treat you. Your doctor will create an individualized plan to help you get the best results. Book an appointment today by calling us at 214-382-3200 or complete the form below.